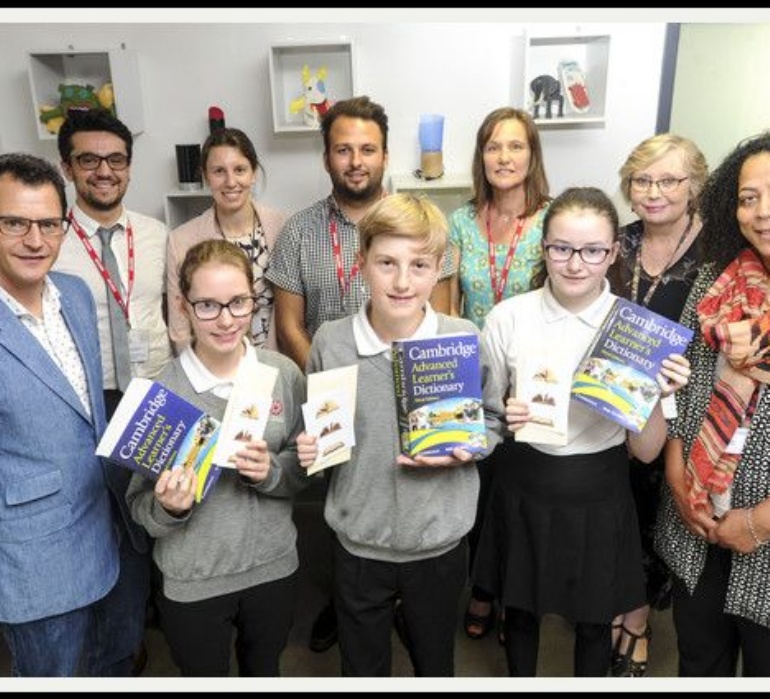 Back in April, we launched a short story competition with the Ely News.

The competition was open to pupils in years 7, 8 and 9, and was kindly sponsored by Toppings Bookshop and Tindalls stationers, both who were involved in the judging, along with college staff and the Ely News reporter and editor.

We would like to announce and congratulate the three winners – Sam Laws, Katherine Causton, and Abigail Brown – who each received vouchers to spend at Toppings and Tindalls, and also a Cambridge Advanced Learners Dictionary from the Ely News.

Ely News editor Wendy Davey said: "We have very much enjoyed working with the college on this competition.

"The standard of entries was amazing – which made our job as judges very difficult! Huge congratulations to our winners."

Please take this opportunity to sit back and enjoy the three winning stories...

It was cold. Oh, so terribly cold. Nate shivered under the thin stiff blanket. Well, least it couldn't find him. But till the morning he had to lie in bed or it would.

Slowly his unsettled mind drifted off into a dreamless slumber. The abandoned mansion creaked wearily as a light breeze sifted through all of its nooks and crannies.

The high stone and colourless pillar stood on top of the mansion's sagging roof. The crumbling walls made it lean like a hunched old man.

He looked at his wristwatch, the only clock in the whole house, and gasped seven o'clock. He should have been up at five, but all the late nights had taken their toll, so he'd slept in.

Nate sighed and shifted his frail weak legs out of the blanket and shuffled over to the right wall of the bedroom. His wrinkled rough hand took a white chalk from his ripped pocket.

Scratch, screech sounded the chalk as he drew another line on the wall. He sighed again. It was already too late to try to escape again.

He shuffled over to the window to retrieve his old wooden walking stick. Nate hobbled back to his bedside table.

Picking up the small canteen of water that appeared there every morning, he took a sip.

Then, as it did every day, he heard the huge pillar moan in protest as more of the ruined foundations gave into their load.

He knew that if he didn't manage to get out in time, the pillar would fall and crush the mansion.

Even if he did survive that, the things inside the pillar's fragile walls would be released and destroy him… and the rest of the world.

He covered his ears, as he knew what would come next - the screams. They wracked through the house shaking it to its core.

The windows wobbled in their panes, he heard ancient vases smash, and his ear drums felt like they were going to burst.

He flopped onto the fowl smelling carpet. And then, as abruptly as it started, it stopped. Nate waited for his legs to stop shaking, and pulled himself up.

He staggered over to his walking stick and gingerly bent down to retrieve it. He placed it back by the window.

Nate felt his throat burning and eyes watering. He felt like he was going to cry. He couldn't take it anymore. He crawled into the cold bed and cried himself to a sleep full of nightmares.

He awoke the next morning and checked his battered wristwatch - five o'clock. Nate climbed out of bed and grabbed his walking stick and hobbled out of his bedroom.

Everything was different, just like it was always. He tapped his way over to the newly formed staircase and descended. Tap, tap, tap went his walking stick.

He passed a cobwebbed photograph of a faceless couple. A vase, adorned with swirls, listed to one side on a pedestal that creaked in the half light.

In one cold room and an empty rocking chair rocked. A painting of a man with no head and knives coming out of every inch of his body fell to the ground in a shower of dust.

Then without warning, the world blurred and dissolved around him sending him spiralling into a shadowy abyss and Nathanial Grey aged 21 locked in a coma since he was 12 years old was released from his nightmares and died.

He was gone. He'd just opened the door and left. I didn't know it then, but he wasn't coming back.

I was only five, but I knew things. I noticed things. Today, he hadn't picked up his keys or called "see you later, alligator," up the stairs before he left.

Under my breath I murmured "in a while crocodile," but this time I didn't believe it. I may have been small, but I wasn't stupid.

I ran down the stairs to find my mum sat in a chair at the kitchen table, head in her hands, crying. I wasn't sure why, but still, I went over and hugged her.

"Daddy's gone away for a while. He isn't very well at the moment," she told me. I nodded and sat down beside her.

"He promised to keep in touch and he will always be your dad, no matter what. Okay, Maisie?" I had no words. I couldn't take it all in. I knew they had argued but now he was gone.

I tried to speak but my throat was dry. Instead I nodded again. Mum pulled me in for a massive hug. The next morning, I woke up early and listened.

I curled up under my blanket and tucked into the smallest ball I could, and cried. Mum must've heard because moments later, she knocked on my door and came in.

"Oh Maisie, look honey, I know everything's different now, but we've got to stay positive. If you won't do that for me, do it for daddy, okay?"

I leant on her shoulder and we stayed like that for a while, me crying, and mum telling me we would be okay, everything would be fine.

She told me stories about my dad; about how wonderful he was on their wedding day, how much he looked after and cared for her. But also how he shouted at her and made her sad.

That day, we just sat on the sofa, mum and I, and watched films cuddled up.

We watched films with pirates attacking ships, films with two people deeply in love, Disney films where princesses were saved by princes; whatever the film, I saw my dad - in love with my mum, helping her, but then hurting her too.

I loved my dad, I hated him; I didn't know what to feel anymore. My head was like a plate of scrambled eggs, all mixed up and slightly soggy.

That day, we didn't even get dressed. I would've loved that any other day, but right then, all I wanted was my dad. I wanted to hug him and feel safe, I wanted him to kiss me so I could feel his sharp stubble against my cheek.

I wanted him to pick me up and twirl me around and tell me everything would be fine. But he couldn't. He was gone. And there was nothing I could do about it. He'd just opened the door and left. And he wasn't coming back.

It's a wasteland. The same wasteland we've been travelling through for weeks. The air is hot and humid and there's a dusty aroma to it.

The atmosphere and the searing temperatures mean we're all struggling. We're nearly out of water, nearly out of food. When will this end? It can't come soon enough.

There's a soft tap on my shoulder, the delicate touch of someone who knows how fragile I am. I don't need to turn around to know its Harry.

There is the soft sound of footfall behind him. I know we're not alone. Me, Harry, our parents and five others, all that remains of the twenty of us that set out on this journey.

We've lost someone nearly every day. But, we can't give up, it just isn't an option.

A mist, holds the group back, it's a mist of despair that has arisen overnight and consumed everything that we thought was us.

"It's going to be okay," Harry whispers "We can do this… together." I take a deep breath, then we step out into the next stretch of wasteland.

In the light of the day the dunes recede away from us, with every step we take they only seem to shrink into the distance. In the dark of the night we rest.

The agonising thought won't leave me, if I hadn't made that comment, we wouldn't be here.

Someone tosses in their sleep, there's a crunch of sand and the sound of footsteps as the guard changes over.

The steps recede away and there's only the silence of the night once more. There's a blaze of light. I hurriedly get to my feet, the night has never been penetrated like this before.

Another blinding flash, this time closer to me. It leaves behind clouds of smoke, isolating me from the group. More flashes, more smoke. It confounds my senses, blinding me to the world around.

It clouds my vision, blocks my nose and fills my mouth, like a thick blanket submerging me in darkness. Someone screams. I try to run towards the sound.

I stumble on a few steps, wincing as a sharp pain rises up my ankle. But the sound has stopped and the lights keep going.

Fear has taken a firm hold of me, but most of all, a sense of overriding pain, overriding loss. I struggle on a few more steps, crying for Harry, for help.

Suddenly, strong arms wrap themselves around me. The scent of pine needles entwined with the sandy smell that coats everything, fills my nostrils and somehow, despite it all I feel safe.

They carry me on, towards a break in the smoke. But the smoke is filling me up, closing me off. "It's going to be okay, Maddie, we're going to make it."

The voice is husky and has the gritty sound, but it's a voice I recognise well. The thick grey curtain which covered the land is starting to draw back. It reveals a wasteland, but this time it's different.

A singed landscape, which stretches for miles, with not even a dune in sight. Now our group are not alone. There are hundreds coming from all directions.

Groups of people, dressed in their rags and covered in sand and smoke. But these people aren't like us, they aren't falling over the cliff of despair.

They have the air of strength, like they know they're nearly at a better place. Maybe we have nearly reached that better place.

Our town, our home has been taken by them, a group who dominate our country. All because I let slip the secret to the entrance of the town. But I can't take it back.

We've travelled this land to find a safer place to live and it looks like we're not alone. We're nearly there and whether I make it or not. I know my friends won't have to live in fear forever.