Message from CMAT cEO: Ban the Beard VS save Santa 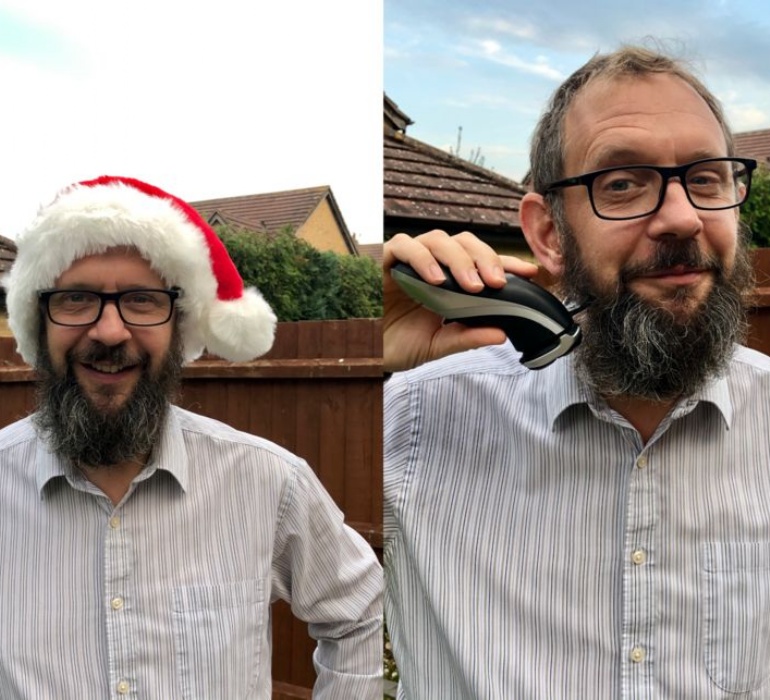 Mark Woods, CMAT’s CEO, has been growing his own feral Lockdown beard since 20th March 2020; no shaving, no trimming, no fancy manscaping – just the real deal as it comes.

Initially Mark swore he would not touch his beard until all students were back in school full-time, however, seeing what a natural beauty the said beard has blossomed into, he thought he would give you the choice as to what he does next.

1) Shave (also known as ‘Ban the Beard’): Mark will give his beard a good trim or remove it completely (to the relief of his family!) and at least return to looking as near respectable as he has ever managed.

2) Leave (also known as ‘Santa’): Mark pledges to turn into CMAT’s (or other associated organisations) very own Santa Claus: no shaving until the school breaks up for Christmas, a full white dye-job and some Covid-safe ‘hohohoing’.

The deadline for making your decision was the 30th September. Some terrified staff, parents and friends voiced their concerns about Mark’s lack of grooming and pushed the ‘Ban the Beard’ campaign. Alas, and unfortunately for some, the idea of Santa Claus seemed to be the frontrunner, raising over £1,000 for Sue Ryder, Thorpe Hall Hospice.

Although the initial conditions were that, unless the £5,000 target was hit, Mark would decide on the outcome of his increasingly feral beard, however, Mark and his co-organisers have since decided that he will keep his beard anyway (and much to the annoyance of his family!).

Mark and the team would like to thank everyone for their generous donations in support of such a superb cause as Sue Ryder, a charity with a special place in the hearts of all those at CMAT and their associates’ hearts.

Please continue with your generous donations! All monies raised will support the outstanding work of Sue Ryder, Thorpe Hall Hospice in memory of our dear friend Martin Bacon, who benefited from their care and who always enjoyed a silly plan.

Mark had this this say as the term ended: "As a parent and a trust CEO, I have often been, I imagine, part of a relatively small group of people who have seen this pandemic from both sides. I have been party to the careful, lengthy deliberations of leadership staff about running track and trace within schools and in attempting to find the fine balance between keeping the school open and the children in school, whilst also trying to ensure that transmission is prevented. Staff are regularly having to make difficult decisions about symptoms, tests and self-isolation, whilst also recognising the stresses and strains placed on colleagues. In addition to contacting parents to explain difficult decisions and exploring contacts beyond seating plans, parents are receiving test information outside of school hours with schools responding, putting plans into action and then sharing it with families. School leaders have to go through this routine time and again. And then, from the parents’ perspective, receiving a phone call or letter from the school which impacts upon their own family life and responsibilities. We are also very acutely aware of the strain that has been placed on so many families for a whole variety of reasons.

And all this before we even start to consider the impact on teaching and learning and the expectation to manage students in school and at home within a constantly changing set of circumstances.

This has been an extraordinary drain on staff in schools and all students within schools. All I will say, is ‘Thank you’ to the staff for all of their commitment, resilience and hard work. And ‘Thank you’ for your ongoing support and patience through this period. I sincerely hope that by the time we reach our next newsletter in the Spring, we will all be feeling that we are starting to make real strides forward in our recovery.

The normal work of trust does carry on, and we want to celebrate the fact that Northstowe Secondary School finally became a full part of the CMAT family in Sept and the Bluecoat School Stamford, should join the trust on 1st January. Our work with The Harbour School and the Greater Peterborough University Technical College is ongoing."