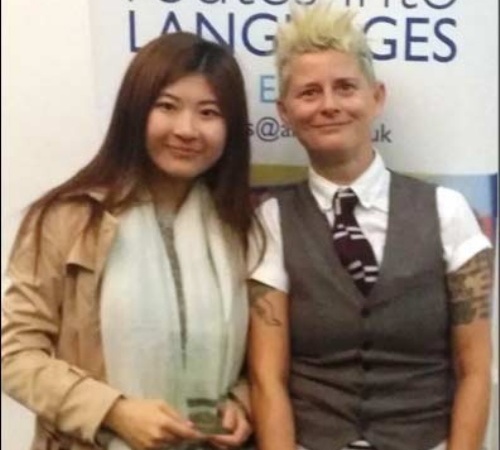 Students who do not have English as a first language, or who speak a different language at home, share a lullaby, poem or song from their Mother Tongue. They then write a short piece in English to explain the poem’s significance to them. Regional competitions and events take place throughout the year.

Lisa took part in the East Anglian Event and chose her favourite poem in Mandarin and wrote about it in English. The poem’s title was ‘Farewells on Grassland’ and is a five character octave, which means there is exactly the same number of Chinese characters in each line.

The regional celebration at Anglia Ruskin University was held on 22nd October 2015, at which Jingqing received her award from slam poet Joelle Taylor (see photo).

Her poem has also been published in an anthology entitled ‘Mother Tongue Other Tongue 2015.